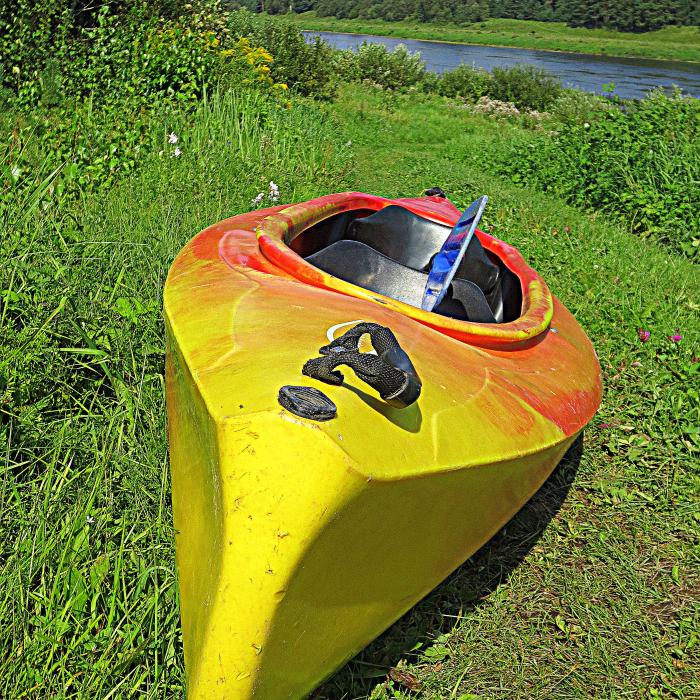 Route: Suitable for active boaters who are interested in longer boat trips for one or two days, during which you can gt to know interesting and less known natural, cultural and historical monuments. Taking into account the fact that at the beginning of the Daugava route – the first 16 km is the border river of Latvia and Belarus, and that’s why several formalities must be completed before setting off (see below). When driving the mentioned section, you must stay closer to the right (Latvia) bank of the river and you must not cross the middle line of the river!! It should be noted thet the island before Piedruja is located on the territory of Belarus. During strong winds, strong waves can be observed in the Daugava, so it’s not suitable for beginners who have no boating experienc, or it’s negligible. Before  or after the trip, it’s worth visiting those tourist attractins that are located on the bank of Daugava, but are not visible from the boats point of view, or are located further from the river.

Recommended time: June- August. Depending on weather conditions, the route can also be driven at other times.Lenght: ~ 63 km. The route can be extended to Krauja (+25 km) or Daugavpils (+37 km). Then you have to count on a three day route.

Time: Two day route if using canoe or dinghy. Day 1: Koskovci- guest house Arkadia (33 km). Day 2: Kraslava- Slutiski (30 km). The time spent on the route may depend on the time devoted to viewing the objects, the type of boat, the number of passengers in the boat, their physical condition, wind direction and strenght water level, current speed, etc. The trip with a rubber boat will take more time, but it largely depends on the factors mentiones above, and most of all- the direstion and strenght of wind.

Degree of difficulty: Easy (in suitable weather condition- no wind or headwind up to 3 m/s) if it’s run as a two day route.

Starting point: Koskovci. ~130m before the turn of the V656 road in the NNW direction, a grassy road leads to Daugava- a path thet can be used to reach the river (0.4 km). It should be taken into account thet ~ 0.3 km in the E direction the river already flows through the territory of Belarus in it’s entire width. It’s strictly forbidden to cross the border by boat!!

Finish point: Slutiski. Boathouse. There is a dirt road close to the pier, where you can drive up and collect boats for further transportation.

Logistics and public transport: The starting and final point cannot be reached by public transport, so boat transport must be arranged with your own transport or use the services provided by local boat renters.

Rest places: It should be taken into account that there are no well equipped water tourism settlements in the mentioned section, as well as publicē rest places on the river bank itself. For short term rest, you can use sandy beaches on the bank of river or islands. Their eksistence and availability is highly dependent on the river, so summer and the time when there have been no significant rains are more suitable.

Information in nature: There are no information stands along the river bank in the mentioned section of the Daugava, therefore maps, information materiāls (it’s convenient to get the Kraslava TIC) and navigation equipment must be prepared before the trip, which must be packed in waterproof covers.

Must know! Safe and responsibel boating!

Pay attention! To perform the route (from Koskovci of Piedruja) you need:

Take care of the safety and health of yourself and your fellow human beings! When making the route, everyone is responsible for their own and others safety! Rescue services: 112.

The route falls whitin two specially protected natural areas (SPNA). Nature park “Daugava loki” was dounded in 1990. the main purpose of it’s creation is the preservation of the unique landscape, biological diversity and cultural and historical monuments of the ancient Daugava Valley. In the eighties of the last century, it was planed to flood the Daugava ancient river in connection with the construction od the Daugavpisl HPS (Hydropower Station). “Daugava loki” is a part of a large SPNA – protected landscapes in the area “Augsdaugava”. In both areas, you can safely go hiking, use the publicly created infrastructure  (tralis, tower, rest areas), ride a bicycle, boat on the Daugava, watch birds, animals, pick mushrooms, berries, swim in well maintained places.